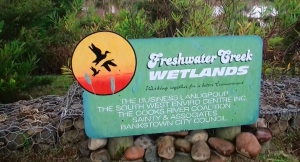 The major objectors to the proposal were the Bankstown Bushland Society as well as other environment groups and local community members.  The development was designed to impact Freshwater Creek in the upper reaches of the Cooks River as well as rare remnant native vegetation, including vulnerable plant species (Acacia pubescens), an endangered ecological community (Cooks River Clay Plain Scrub Forest) and an endangered plant population (Wahlenbergia multicaulis) protected under the Threatened Species Conservation Act 1995.    Notwithstanding the impacts, the project was approved and as part of the development of the the whole industrial park a regional detention basin was required to address potential flooding.   Volunteers who had opposed the freight terminal and associated development  saw the potential in creating an off-line wetlands within the 5.8 ha detention basin.  They 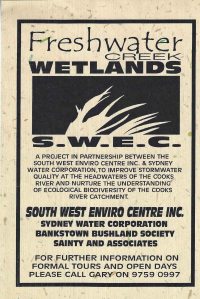 successfully negotiated this outcome and a 2ha wetlands was included within the basin.

On the 19th October, 1998, the South West Enviro Centre (SWEC), comprising members from the Bankstown Bushland Society and the Cooks River Coalition was formed with the intention of establishing an Environmental Education Centre.   After the 5.8ha site was officially opened on the 9th June 2000 they took on the stewardship role of the site in collaboration with the developer, Business Land Group/Landcom.   This included  flora and fauna surveys, public tours to explain the importance of wetlands, open days where participants engaged in revegetation activities and water quality testing, as part of the Sydney Streamwatch program,

In 2005 the Chullora Wetlands were transferred from Landcom to Sydney Water Corporation(SWC) and in 2007 SWEC signed a five-year licence agreement with SWC.  After more than a decade of stewardship, SWEC did not renew its licence and from 2012 it has been fully managed by SWC.

Cooks_River 2007 update on the catchment including wetlands.

2.1 2013/14 River Health Site Summaries and River Health Grades (p.5)  Cooks River Monitoring 2013 to 2014 report
River Health grades were variable across the Cooks River catchment and the ecological condition of sites ranged from fair to poor (Table 3). Chullora Wetland received the highest overall grade of B- indicating fair ecological condition. Grades of B for water quality, B+ for macroinvertebrates and C+ for riparian vegetation condition contributed to this.