Celebrating 30 years of Streamwatch on 3 September 2020 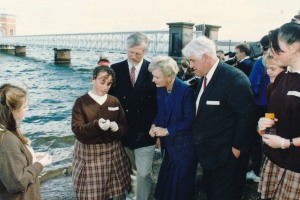 Sydney Streamwatch will mark its 30th anniversary on the 3rd of September. It is the second longest running Citizen Science program in New South Wales and a few years older than Melbourne Waterwatch, which continues to be supported by Melbourne Water.

In Sydney Water Corporation’s (then Water Board) Annual Report for 1990/91 it was recorded as:

A major initiative this year has been the launch of Streamwatch, an environmental education project of the Water Board for schools and community groups.  Streamwatch provides groups with sophisticated water quality monitoring test kits, training in their use and support in developing teaching programmes to implement Streamwatch in schools.  Streamwatch was launched jointly by the Hon Tim Moore, Minister for Environment and the Hon Virginia Chadwick, Minister for Education, at Prospect Reservoir on 3rd September 1990. Fifteen schools participated in active water quality monitoring in a trial phase at the end of 1990.  Currently, 44 schools and community groups are involved in the project and the number will rise to 70 by the end of 1991.  Groups are spread across the Board’s area of operations and some groups are in the Shoalhaven area.

One of the major figures of the time recently commented that it was:

part of a suite of initiatives that sought to transform the then Sydney Water Board from a primarily engineering-focused organisation to one that understood and accepted its proper environmental responsibilities in our community. 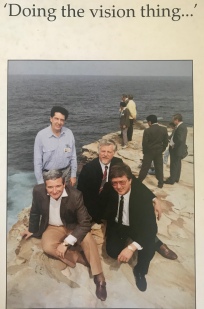 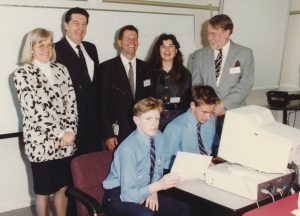 One of the first schools involved in Streamwatch was Freshwater High(video link)under the direction of Sue Lennox.

Steamwatch continued to be acknowledged in the triennial NSW State of the Environment Reporting until its final appearance in 2003.   In April 2003 the Hon Frank Sartor became Water Utilities Minister and he appointed a new CEO at the beginning of 2004.  During this period the Streamwatch program was transferred from an Environmental Science and Education cost centre to one for public relations. Dedicated Streamwatch coordinators continued to deliver support services to groups and schools and conduct education events on request.  However, the program’s importance to Sydney Water diminished, funding was cut and the program eventually handed to the Australian Museum in 2012.  Sydney Water provided full funding for four years and partial for another three. The changes to Streamwatch reflected broader changes to community engagement in environmental monitoring, eg. the closure of Catchment Management Committees. In July/August 2005 the NSW Premier, Deputy Premier and Planning Minister resigned and the new executive was less focussed on environmental responsibilities,  particularly where these involved partnerships with volunteers/citizen scientists. The trend has continued.

Sydney Water lost a major source of ‘ambassadors’ and educators when it handed the program to the Australian Museum.  The program, which is now hosted by an NGO(Landcare) has been reduced to below half the number of participants compared to when it was fully funded at the Australian Museum in 2015.  During the period at the Museum the program coordinators continued with water bug surveys, quality assurance, and introduced field days at the Homebush Environment Centre as well as algae monitoring.

After 30 years the program has yet to be comprehensively reviewed and revised to meet current community expectations:

A Scientific Steering Committee is required to ensure that the tests and equipment are up-to-date and aligned with (or complement) monitoring undertaken by agencies/consultancies; that quality assurance occurs; that the program can deliver results to key stakeholders such as Councils and Planners and alerts to regulators within the NSW DPIE. Members of a formalised Steering Committee would also act as advocates for the program.

The public need to be aware that Streamwatch exists.

Stakeholders, like Council planners, EPA, Department of Planning Industry and Environment need to be aware of Streamwatch. Most Streamwatch groups take a stewardship approach and record other observations eg. invasive species, litter.  Local volunteers often have extensive experience and can provide local knowledge that otherwise may not be available to Councils and other responsible agencies that have gaps in ‘corporate knowledge’ due to staff turnover.

As suggested by a former program manager, there is a crucial element of the program which needs to be revived. This is a community and stakeholder accessible website. The website allows immediate data entry in either community level or quality assured level data. This is the facility which gave Streamwatch the credibility to be valuable to the community and to external stakeholders.

It should be noted that while some data is uploaded to SEED results for e-coli and FC are not, nor are other observations or contextual information.  The public are interested in this information as discussed in Gayle Adams’ account of monitoring  the Cooks River.

When a friend showed me a clipping of a tiny advertisement to set up and run a community water quality monitoring program little did i know what lay ahead.

I had recently taken a firm to the NSW supreme court for water quality violations along the Nepean river  where my family owned a small farm. I had also just completed a research masters degree based on action research, which the advertisement asked for. It seemed like a marriage made in heaven for me  and that’s exactly what it turned out to be

The opportunity to lead young people at school and community group members of all ages in the field of community environmental action in collaboration with organisations such as Sydney Water, Telstra and local government organisations was extremely fulfilling. In retirement, I consider Streamwatch to have been the pinnacle of my professional career. Its empowerment of people to take action on the environment has been documented in the PhD research thesis of Dr Raimund Pohl.

The following photos are from La Perouse Coastcare, a group that has been involved in environmental stewardship since 2000 and as Streamwatchers since 2002.  It is dedicated to Henry Peters, one of the founding members, who shared his birthday with Streamwatch.

← Taking the Citizen out of Citizen Science